One of the best things about shared PowerShell scripts and modules is that they change a lot. The authors, the community, and development teams are continuously improving them. But, that creates a responsibility for users to discover changes and for development teams to help us do so. I love finding out about new features, but I kick myself when I discover, way too late, that a new feature I didn't know about could really have improved my productivity.

So, check the release notes!  (Get-Module's ReleaseNotes property (PSModuleInfo.ReleaseNotes) was introduced in PowerShell 5.0.) 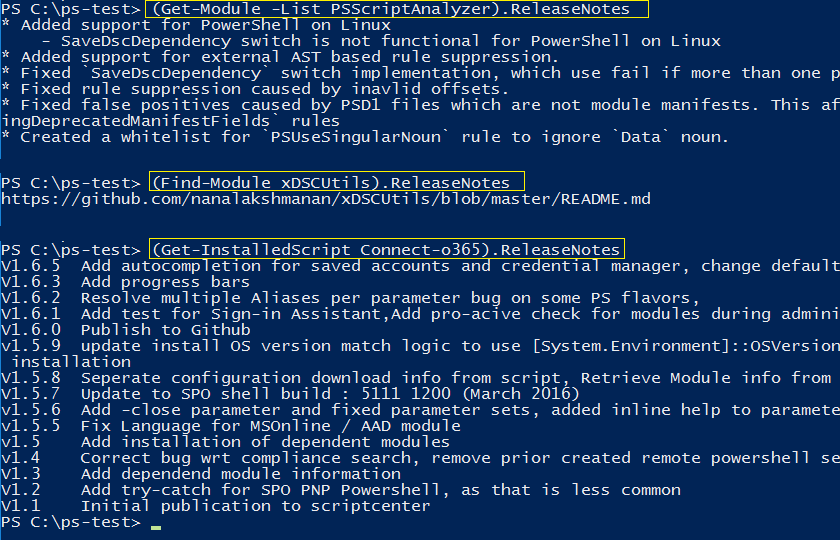 So, if you can't find the release notes from one source...

You can also get release notes for scripts that PowerShellGet installs. (Tip: Omit the .ps1 in the script name.)

Like help, release notes and change logs benefit the authors and collaborators as much as the end-user. But, the content can vary widely.

But, I'll take a changelog in release notes rather than no data at all.

There's not much official guidance. The PSRepositoryItemInfo that PowerShellGet commands return isn't documented anywhere, because it's really just a named PSCustomObject. The ModuleInfo object that Get-Module returns is documented in MSDN, but its ReleaseNotes property isn't well defined...

And, there's not (yet) much guidance from Get-Help... 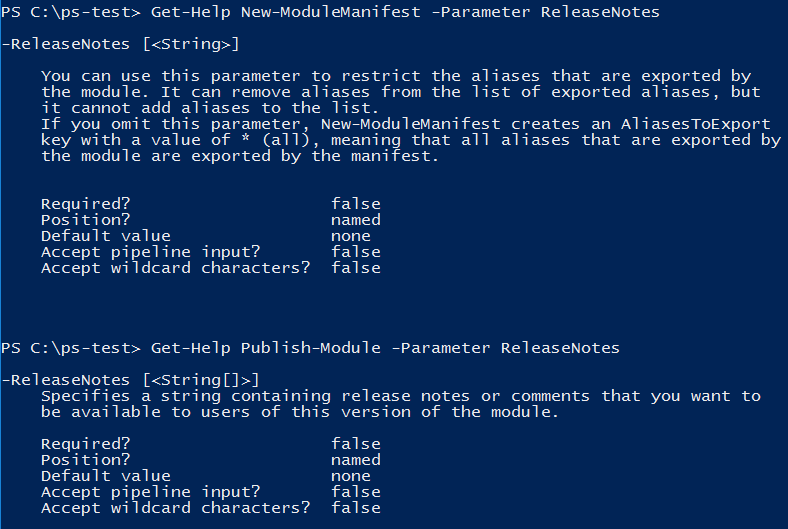 .... so module authors just do what they think is best.

The remaining 80% consist of release note strings for the module, either the current version... 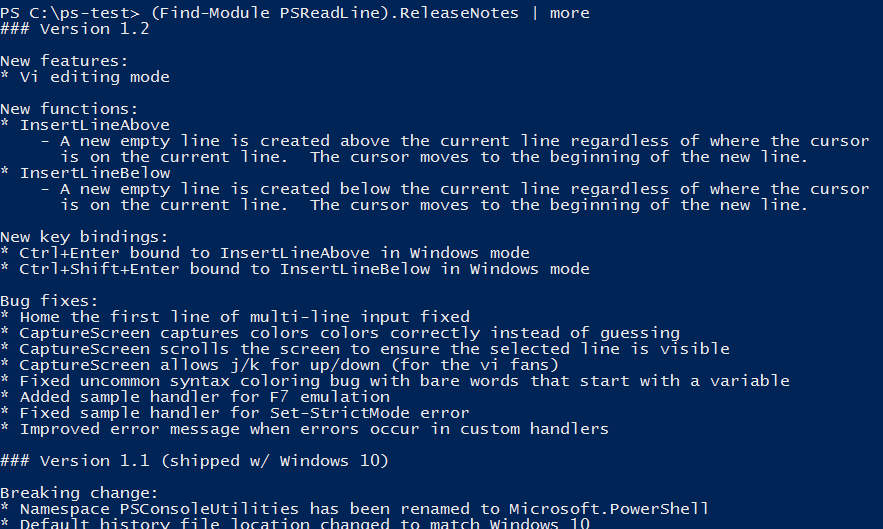 The core modules from Microsoft don't have release notes, but I suspect that we'll see them in 6.0 open-source versions.

I think this is fine, at least for now. It gives us some time to figure out what's really useful to users. At some point, the community will publish best-practice guidelines, but it's good to have some time to experiment.

How to Get Release Notes:

To get the ReleaseNotes for a module:

To get the ReleaseNotes for a script:

For extra value, use the version parameters of the cmdlets to find the differences between versions.

How to Add ReleaseNotes

To add the ReleaseNotes property to your module (Get-Module):

To add the ReleaseNotes property to PowerShellGet modules (Get-InstalledModule):

In all cases, the value of the ReleaseNotes parameter is a string array. Enter a URL, an extended string, or a here-string.

Because Import-Module fails when it finds an unknown or invalid key in the module manifest, the PowerShell Team is putting all of its its new keys in PrivateData to prevent breaking changes, like the one caused by the HelpInfoUri key. The team puts official PowerShell keys in PSData to distinguish them from keys defined by a module author.

Best-practice standards are important, but I'm secretly pleased that there wasn't much initial guidance for the ReleaseNotes value, because it gave people time to experiment. Here's my first draft of guidance. I'd like to hear your opinions.

Special thanks to Aaron Jensen for his contributions.

But, most importantly, maintain and share release notes. It will help you, your colleagues and collaborators, and the end-user.