Working with SemanticVersion in PowerShell

Working with SemanticVersion in PowerShell

As the versions of Windows PowerShell and PowerShell (not only Windows!) proliferate, it becomes more important to know on which version of PowerShell your shared scripts and modules are running.

Beginning in the open-source versions of PowerShell 6.0-alpha, the version object in $PSVersionTable.PSVersion switched from a System.Version object to a System.Management.Automation.SemanticVersion object.

When you start playing around with the new, open-sourced PowerShell 6-alpha on Github (download it here), you might notice that the $PSVersionTable.PSVersion object is not the good old System.Version object that PowerShell has been using since PowerShell 2.0.

Instead, it's a SemanticVersion object that is defined in the new System.Management.Automation.ni.dll, where "ni" stands for "native image." 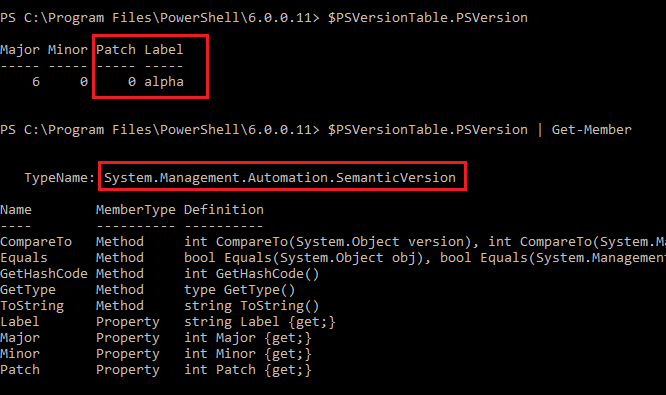 There's no MSDN help yet for this object, but Jason Shirk assures me that there will be after they settle on how it will work. 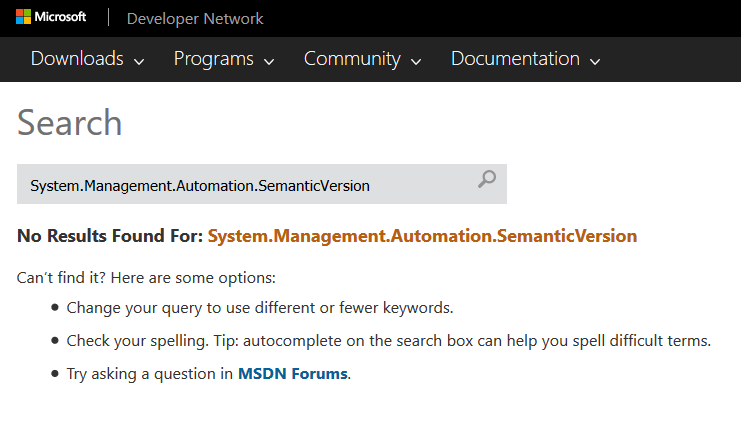 So, what's going on here?

What is Semantic Versioning?

Semantic versioning is really a gift to system administrators, operations managers, and end-users (all of us). It makes version changes understandable and predictable. I'm a big fan.

TIP: To learn about semantic versioning, read the spec. Really. It's not difficult.

The problem with traditional versioning is that it's arbitrary.

On the author side, there are no real rules or much guidance for when to increment a property of the version object. You've made some changes. Do you increment Major, Minor, Build, or Revision? There's probably a lot of the "I worked hard on this, so I'll increment this one." Even when there are internal rules for incrementing version properties, the rules aren't typically communicated to the end-user or shared with other authors.

Semantic versioning is the solution to this quandary. The specification establishes clear, but not inflexible, guidance for when to increment which property of a semantic version. It provides rules for authors and critical information for consumers.

When the Label value changes, it's unlikely to affect your business. A change in the Patch value isn't critical, unless a command in a script or module requires that bug fix. Changes in the Minor version are important, especially when you depend on the new feature. And, of course, breaking changes are always significant. Even when they don't affect you immediately, you need to learn about them.

How to Require a SemanticVersion

The standard technique for requiring a version of Windows PowerShell is the #Requires -Version directive. #Requires sets only a minimum value, not a required one, and it inspects only the Major and Minor properties of the Version object.

However, #Requires -Version does not take a SemanticVersion object, even on PowerShell 6-alpha. Only a string that converts to System.Version is valid.

So, code like this works on 6-alpha. But, it fails on PowerShell 5.1 and earlier, not because it failed the version requirement, but because it can't create the reference object.

To check for a Patch or Label in a SemanticVersion on a system that might have PowerShell older than 6, use a version string and let PowerShell convert it during the comparison.

Placing the Version object on the left eliminates the problem.

This is all very interesting, but if you've been following the open-source versions from 6.0.0.7 to the current 6.0.0.11, you'll notice that the SemanticVersion has not changed at all. It's still 6.0.0-alpha.

The PSVersionTable property that changes between open-source releases is the GitCommitID property, which is just a string. Because the SemanticVersion class isn't yet documented, we don't exactly know, but we probably can guess its use. 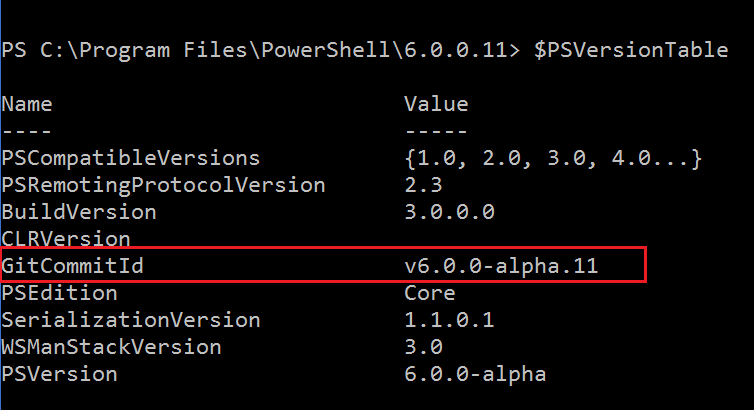 But, after going to the trouble to switch, oh-so-wisely, from a System.Version object to a SemanticVersion object, why aren't they incrementing it at all?

I had a few minutes to chat with PowerShell team members Kenneth Hansen, Hemant Mahawar, and Jason Shirk about this issue at PowerShell Conference Asia (@PSConfAsia). They explained that they don't have the details of how to use the object completely worked out yet. We're likely to see it implemented, and correctly, in the future, but probably not in the Alpha timeframe.

In the meantime, be aware of the differences, and check that SemanticVersion object.