Updates: We have updated this article to reflect these changes.

Unlike previous releases, Windows PowerShell 5.0 will have supported releases, but will not be final. It will be updated with Windows.

All SAPIEN software products fully support Windows PowerShell 5.0 and the new modules, like Pester and PSScriptAnalyzer.

So, how do you find and install PowerShell 5.0?

Notice that Windows PowerShell now has non-negative values for the Build and Revision properties in its version number.

The full version is useful for comparing versions, although not all versions are different from each other. On the downside, the #Requires -Version statement looks only at the Major and Minor property values, so you need to use an IF statement, or something similar, require a particular version.

In this example, #Requires -Version does not stop the script from running. 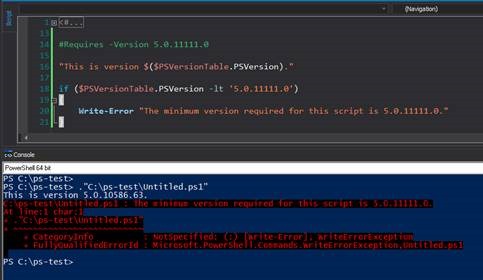 If you’re running an older version of Windows, you can install Windows PowerShell 5.0. After being recalled, this RTM version was re-released on February 24, 2016. It’s available in Windows Management Framework (WMF) 5.0 on the Microsoft Download Center and in the Microsoft Update Catalog for large deployments using WSUS or SSCM. It’s also available as a Windows update, KB3066439.

In the Microsoft Update Catalog, search for the version designed for your system. (Searching for “Windows Management Framework,” “Windows PowerShell,” or “PowerShell” doesn’t return these updates. You need to have the magic KB numbers.)

If you installed the WMF 5.0 release version while it was posted on the Download Center and you were affected by the PSModulePath bug, there’s hope for you, too. The PowerShell Team is expected to release a fix to restore your PSModulePath.