We’re always evaluating the best, easiest, and most efficient ways to write, run, and publish Windows Powershell scripts and modules. But, our starting point is always how people work now.

We were curious about how PowerShell scripters, including managers, ran scripts, and how their employees ran scripts written for them. 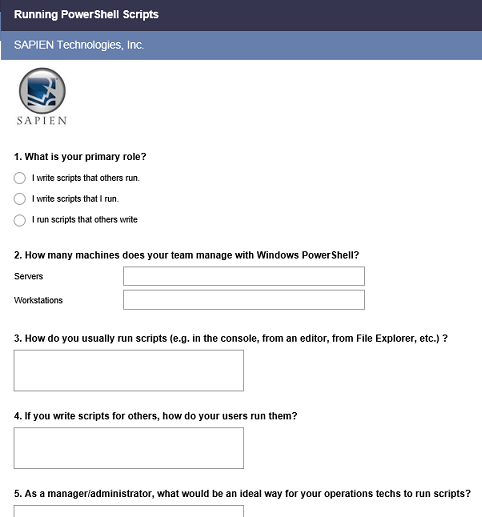 To gather this information, SAPIEN Technologies, Inc. created an online survey about the ways in which users run PowerShell scripts. We encouraged users to participate in a blog post and several posts on Facebook and Twitter. And, people really responded. We collected 88 responses between 12/16/2015 and 1/05/2016.

Here are our major findings:

How do you run scripts?

A few things surprised me. For scripts that I use all the time, I run them from the console. But if the script does anything complex, or runs infrequently, I almost always open it in PowerShell Studio, review how it works, and then run it from PowerShell Studio.

Well, I’m not alone. In fact, 20% of users described the same “console+editor” pattern. 22% use the console exclusively and 15% use an editor exclusively.

Also, none of the answers was correlated with the size of the enterprise or number of servers/workstations managed, except that larger enterprises used homegrown workbenches or services, like Kaseya and LabTech.

A handful of respondents mentioned SCCM, SMA, Azure Automation, and Orchestrator, but they totaled only 7%.

I was also surprised 17% of respondents run scripts solely or in part in Task Scheduler. That might be because their scripts are scheduled as tasks, or they are using Task Scheduler to automatically run a script with different permissions.

How do your employees run scripts?

As you would expect, the answers changed when we asked about how managers have employees run scripts. And, many respondents were careful to distinguish between employees who were proficient in PowerShell and those who just followed instructions.

The number of people running from the console (alone or in combination) dropped from 65% to 50%. Task Scheduler dropped from 24% to 8%.

19% of respondents provide some sort of GUI interface for their employees to run scripts, 16% have them run from File Explorer, and 13% package their scripts in executable files for employees to run.

We also asked about ideal environments for delegated script execution.

GUIs were the most popular answer, increasing from 19% (actual) to 30% (ideal). But the second choice was a web page or portal. About 14% of respondents thought that was ideal, although only one respondent reported actually using one.

22% stuck with the console. One respondent explained that, in their opinion, anyone who ran scripts should know at least enough PowerShell to run them with the correct parameters and values.

Thanks to everyone who participated in the survey. If you’re interested in more information from the survey, let me know. And, if you have comments about the results, please post them here.