Applies to PowerShell Studio 2016 and PrimalScript 2016 and later.

I write lots of scripts — for production, for research, for testing, and for demonstrations. And, inevitably, I hit a bug. I'm actually relieved when I do, because no code is perfect and I'd rather find the bugs before my users do. In fact, I make sure the content in my test database is full of oddities so it's as close to the real world as possible.

When you are debugging with a large test sample, like a database or directory, the default line breakpoints are not sufficient. I can hit a line numerous times before I get to the condition that breaks it. And, I don't want to spend my time repeatedly banging on the F10 (step over) and F11 (step into) keys until I hit the offending condition.

In PowerShell Studio and PrimalScript, you can create and edit line, function, and variable breakpoints, and beyond that, you can set conditions for breaking. For example, I don't want to break on line 32 every time it runs. I want to break when the $ID variable has a value of 9999 or only when the Set-Widget function runs and $ID is 0.

Line breakpoints break just before the line of code with the breakpoint runs. Because most debuggers support line breakpoints, we're very accustomed to using them. But, they might not be most efficient, so before you use a line breakpoint, consider whether a function or variable breakpoint might be a better choice.

One of the nice things about line breakpoints is that they're easy to see. You can see the big red dot beside the breakpoint on line 24 in this image. But if you want to break when the Set-Maximum function runs — not just when it's called on line 24, consider a function breakpoint. 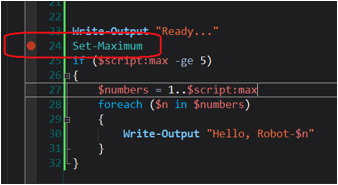 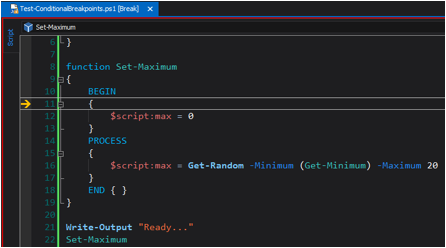 Also, by default, a function breakpoint breaks every time the function runs, which might be handy, depending on your use case.

Variable breakpoints are my favorites. They break when the variable value is used ("read"), is changed ("write"), or either ("ReadWrite").

Like a function breakpoint, you won't see a big red dot in your script to indicate a variable breakpoint, but you can see it in the Edit Breakpoints dialog box. (See why I like that dialog so much?)

For example, in this script, a write-mode variable breakpoint on 'n' is triggered on line 26, when the value of $n changes to the next value in the $numbers array. But, it is not triggered on line 28, when $n is read, but not changed. If I need a different behavior, I can change the mode of the breakpoint to Read or ReadWrite.

To set a conditional breakpoint:

The value in the Action box is a script block that runs when the breakpoint is triggered.

For example, this variable breakpoint breaks when the value of $n is changed to 4.

In the Action script block, the 'n' variable is referred to as $n, just like it is in my script. I use the Break keyword in my script block to tell Windows PowerShell to break into the debugger when the condition is met.

When an Action is set, the variable breakpoint is still triggered every time the value of $n changes. But, the script does not break into the debugger. Instead, it runs the Action script block. If $n is not 4, the '{break}' in the Action doesn't occur and the script continues.

But when the variable breakpoint is triggered on a change in $n, and the value of $n is 4, the script breaks into the debugger. 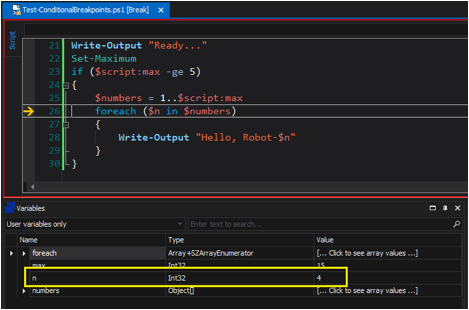 You can set conditional function breakpoints, too. For example, this function breakpoint breaks into the debuggers only when the Get-DeviceID function is called with a parameter value of 'localhost'. Otherwise, it records the value of the ComputerName in a text file. 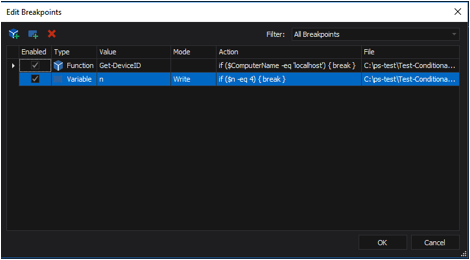 Conditional breakpoints are so powerful that, after a bit of experience, you'll use them all the time. Just remember to include the Break keyword if you want to break into the debugger.