Note: V5 will be officially supported after its release. We do not offer support for preview versions.

Side by Side Installations:

When working with our Script Packager, you will notice that there is no option listed for V4 that is because the V3 Platform engines also works with V4. Therefore if you are ever in doubt, choose the V3 option.

When installing a new version of Windows PowerShell (see the related article below) you have to run the RegisterControls.exe. 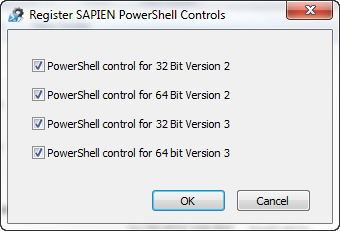 How to Enable and Disable PowerShell V2 on Windows 8

What to do when you install a new version of PowerShell?